Home / Blog / What You Should Know About Ski Qualifications

What You Should Know About Ski Qualifications

If you are new to the ski industry it is unlikely that you will be aware of the politics that surround our fun sport. You should read this blog carefully as it will give you the overview of the current mood within the industry and certainly it should have a major influence on which qualification you choose and more importantly, where you should invest your time and hard earned cash. 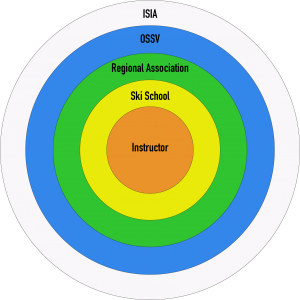 Let us look at the diagram from the outer large circle, inwards, to you as the instructor in the centre.

The ISIA is the International Ski Instructors Association who were once a very important part of maintaining internationally recognised standards in the ski industry around the world.

The ISIA’s influence in the ski industry has been severely weakened recently as the main Alpine Ski nations made up of Austria, France and Italy, have recently withdrawn their support and membership of the ISIA due to a dispute over what they see as the watering down of standards to such a low level that they felt they could no longer back the ISIA. The ISIA’s own advisor, Valentin Kiedaisch is quoted as saying;

“now that the large ski countries have left the ISIA, the ISIA is in danger of losing its relevance. If even Germany and Switzerland, who are currently at the lead of the support, were to express a lack of interest, then the ISIA will become irrelevant.”

Not to over complicate things, you as a ski/board instructor, do not need to concern yourself about the ISIA as it will have little-to-no effect on your future. If the ISIA is to regain it’s lost status and influence it would need the backing of the three major Alpine ski nations of Austria, Italy and France.

That brings us to the second circle of the ÖSSV – Österreichisher Skiverband (The Austrian Ski Association). France and Italy have their own governing body who sets the standards in their respective country. Austria is a little different as it also has Regional Associations who are responsible for qualifying ski and board instructors up to level 3.

In Austria there are actually eight Associations, one for each county region (Bundesland) with the exception of Burgenland who does not have a Ski Association. All of the associations work generally the same way with the exception of the Vorarlberger Skiverband (VSV) who require that anyone working in their region is both ski and snowboard qualified and their Anwärter is not officially recognised by the other parts of Austria. Strangely, this association actually remains part of the ISIA to date.

All of the associations in Austria work on the principle that their Anwärter, although their entry level, is actually equivalent to an international level 2. This is a contentious statement but it is easily backed up when you factually demonstrate what duties an Anwärter ski or snowboard instructor is permitted carry out compared with a level 1 for example with a Canadian or BASI qualification.

Austrian ski schools actually do employ people with similar jurisdiction and limitation as a level 1 Instructor but they simply refer to them as Aushilfe (meaning assistant or helper) They are normally 16+ year olds who are looking to earn some extra money during their school holidays or weekends and they are always supervised by a qualified instructor.

As an Anwärter Instructor you are qualified to lead your own group up on to a mountain and teach unsupervised as per the internationally quoted Level 2 standards.

The next and most important part in this circle, is the ski and snowboard schools who are the real decision makers. A ski school will happily employ anyone with the Anwärter or higher qualification such as Landes 1 or Landes 2 from all Associations here in Austria (with the exception of Anwärter VSV).

The ski schools in Austria are quite frankly, and with bias, seeking Austrian qualified instructors no matter what argument someone might bring to the table from another qualification system.

People will (quite rightly) point out that Austria, as an EU member, is subject to decisions made by European Law and that the ÖSSV and the Regional Associations such as the Weiner Ski and Snowboardlehrer Verband (Snowsports Academy), the SBSSV and Snowsports Tirol etc. must accept other ski and snowboard instructor qualifications from other countries and guess what, they do but the ski schools are not obligated to employ these instructors and this is the nail in the coffin for anyone in that small inside circle that does not hold an Austrian qualification. No one can force a ski school to employ someone they do not want to employ and as much as people think that all qualification are equally recognised that is simply not true when you reach those last two circles.

In short if you want to work in Austria, get an Austrian qualification that is by far cheaper and recognised around most corners of the world. That said if your desire is to work Italy get an Italian qualification for the same reasons and so it goes.

We believe whole heartedly in a fair system for all nations but until that actually exists our first loyalty to our students and our moral compass mean that we need to tell it how it is at ground level when it comes to working in the snowsports industry.

With the Anwärter Course we can guarantee you a season instructor job for the season here in Austria or equally in Japan for example. It is also now possible to do an Austrian Anwärter completely in English

Finally compare the cost of our Anwärter programme to any other Level 2 from around the world and do the math. It’s a no brainer!

Site Designed and Developed by Mediaworks